In typical artificial turf, Genan rubber granules are used for both the infill layer (FINE, FINE/MIX or MEDIUM rubber granulate) and for the manufacturing of the e-layer (COARSE, SUPER COARSE or ULTRA COARSE rubber granulate) – no matter whether it is built on site (in-situ) or from pre-fab mats.

Artificial turf pitches are fully accepted by the major football organisations FIFA and UEFA – and are now officially allowed for use at all levels, including Champions League and the World Cup. 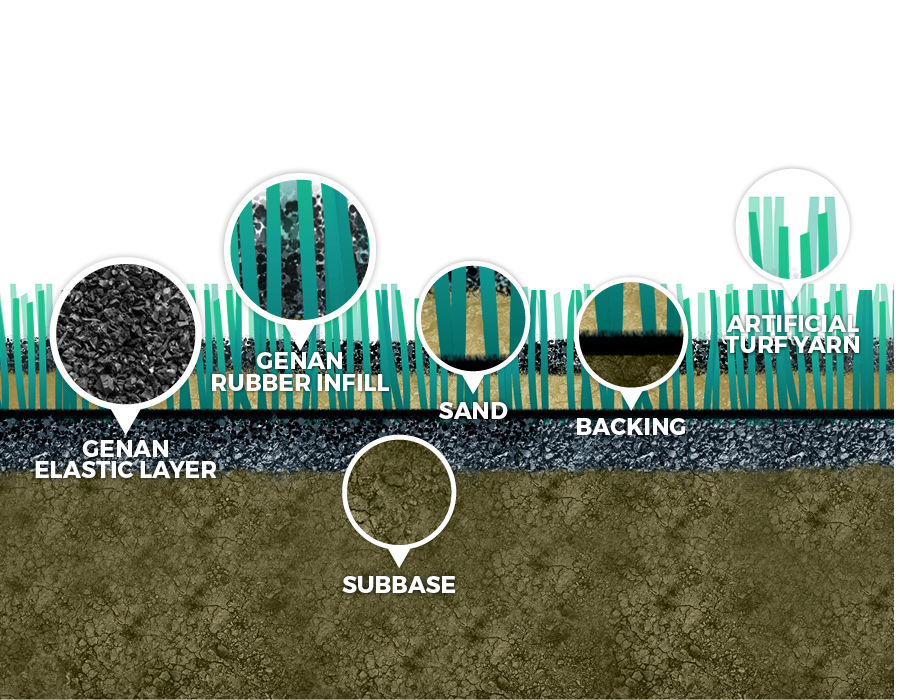 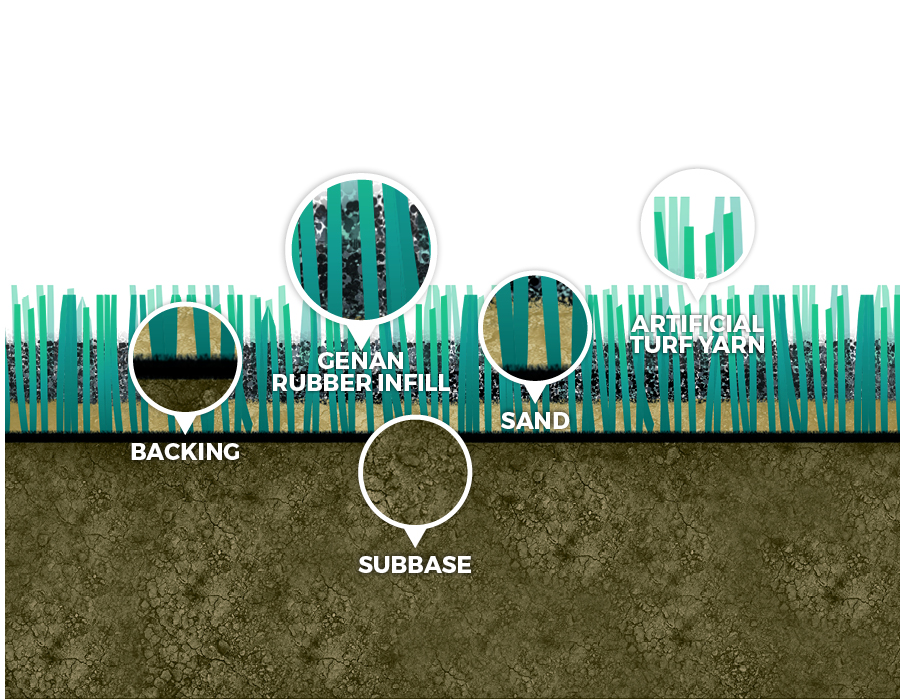 INFILL IS THE MOST IMPORTANT FACTOR INFLUENCING BALL BEHAVIOUR ON THE PLAYING SURFACE
Although infill accounts for only a minor share of the total costs of a complete artificial turf project, it is possibly the most significant element. Infill quality is paramount for meeting the performance criteria of the pitch – and is thus an extremely important ingredient for the image and perception of the playing surface.

INFILL HAS IMPROVED BALL REBOUND AND RUNNING CHARACTERISTICS
In order to ensure optimum ball behaviour, the size of rubber granules must not be too fine, nor too coarse. If the infill is too fine, it will compact, and the playing surface will not be elastic enough. If the infill is too coarse, it will absorb too much energy from the ball, resulting in poor rebound performance and splashing. In order to meet all special requirements, Genan therefore offers 3 different infill sizes: FINE, FINE/MIX and MEDIUM.

MAINTENANCE
In order to uphold the superior characteristics of an artificial pitch, infill must be topped up from time to time. Such regular maintenance is low-cost, but extremely cost-saving in the long run. The elasticity, weather resistance and extremely good aging properties of the pitch are maintained, and ball behaviour continues to be outstanding.

A shockpad is an elastic sublayer, also known as e-layer, boasting long-term elasticity and shock absorbance. It is used underneath the carpet in some artificial turf systems. The e-layer/shockpad is made of rubber granulate and polyurethane binder. Genan offers rubber granulate for sublayers in three standard sizes: COARSE, SUPER COARSE and ULTRA COARSE.

There are two main ways of making the elastic layer. It can either be built on site (in-situ), where rubber granules are mixed with 8-12% polyurethane binder, or it can be made from pre-fabricated rubber mats. In both applications, Genan high-quality rubber granulate is used.

RUBBER FROM END-OF-LIFE TYRES IS IDEAL FOR E-LAYERS
Genan rubber granulate is a superior material used for elastic layers, as the elastic properties of rubber from end-of-life tyres are the very best available in the market. Several decades of research carried out by the tyre industry has developed a long-lasting, elastic material, which is extremely well suited for this particular purpose.

What is artificial turf?

Why choose synthetic grass instead of natural grass?

Synthetic turf pitches are used for both football, baseball, lacrosse, american football and rugby fields. Installing artificial turf fields has the advantage that you can play on them all day long, all year round. Synthetic grass is less impacted by wear and tear, and maintenance is limited compared to the efforts necessary to keep a natural grass field in good shape.

Can football players get skin burns, if they make sliding tackles?

Skin burns were a major problem with the first two generations of artificial turf; but with the technology of 3rd generation turf – and with the right and correctly constructed system – skin burns are no longer an issue.

Can football players get scratches from steel in the infill?

No, Genan infill is clean and free from steel contamination.

Is there a risk of water contamination from an artificial turf pitch?

A recent, international literature study made by the Danish Technological Institute (DTI) estimates the annual discharge to the aquatic environment to be in the 2.5-36 kg per pitch per annum interval. By following best practice guidelines on pitch design, maintenance as well as behaviour / routines and habits of players and maintenance personnel, these limited quantities can be reduced to almost nothing.

How should an artificial turf pitch be designed, used and maintained in order to avoid spreading of infill to the environment?

Genan recommends the installation of barriers / infill fencing panels around artificial turf pitches – as well as “catch areas” with special mats along all four sides. Pitches must be properly fenced in, with only a few entrances, and each entrance should have a clean-down exit area, where players are required to brush off their clothes and empty their shoes. In connection with pitch maintenance, special brushes must be used – and used for this purpose only.

Is the ball rebound the same as on natural turf?

The specification of artificial turf is composed in order to simulate exactly the same rebound as on natural turf.

Does the ball travel faster or slower on an artificial turf pitch?

Why has FIFA included artificial turf in its recommendations?

Artificial turf is an economical solution, because the turf can be used much more than natural turf. It can be played on all year round, no matter the weather conditions, and pitches do not have to rest between matches, as do natural turf pitches to protect the grass. Maintenance costs are much lower than for natural turf, and dependency on natural resources like water is usually non-existing.
Another very important issue for FIFA is the development of good football in the third world. In developing countries, there are usually not enough resources to maintain natural turf pitches, because of the water consumption and other maintenance costs; but artificial turf opens up for the development of many young talents in poor countries.

Can you play all year round on artificial turf?

Yes, the only requirement is to remove snow, if any. Follow the maintenance advice of the turf manufacturer in question.

How expensive is it to maintain an artificial turf pitch compared to natural turf?

The answer to this question varies a lot depending on the relevant geography. As a rule of thumb, savings by having artificial turf increase the more extreme the climate. In very cold and very dry areas, savings are enormous; but savings are considerable irrespective of location.

Is it true that both ball and players get dirty when playing on artificial turf?

Numerous scientific studies – both historic and recent – have established that rubber infill made from end-of-life tyres does not pose any elevated health risk. In February 2017, the European Chemicals Agency published its findings in a new, comprehensive study. ECHA “has found no reason to advise people against playing sports on synthetic turf containing recycled rubber granules as infill material”. This advice is based on ECHA’S evaluation “that there is a very low level of concern from exposure to substances found in the granules”.

KEEPING RUBBER INFILL ON THE PITCH IS IMPERATIVE

For the sake of the environment – and to keep the need for granulate refill at a bare minimum – artificial turf pitches should both be constructed and maintained in a way to ensure that rubber granules stay on the pitch.

As sustainability and climate-friendliness is all-important to Genan, we have made three different guides with our recommendations for the:

Genan has furthermore made a small video explaining the ins and outs of recycled rubber infill for artificial turf.

Genan’s recommendations are based on recent scientific reports – as well as common sense and care for the environment.

If an artificial turf pitch is constructed, maintained and used in accordance with these guides, the spreading of different types of microplastics from the pitch to the environment can be reduced to around 100 g a year.

STRIVING FOR A SUSTAINABLE FUTURE

Keeping rubber granulate on the artificial turf pitch is paramount! For the sake of nature – but also to keep the need for granulate refill at an absolute minimum.
Fortunately, simple measures make a huge difference – and we can all do something!
Watch this video to see what Genan recommends – for a sustainable future…

In Sweden, different players joined forces in a research cooperation and constructed a reference pitch – Bergaviks IP – made as a closed system with preventive measures, filters etc.

Watch this film and hear the participants explain about the concept – and scroll down to download Ecoloop’s report on the project.

THE IMPORTANCE OF RUBBER INFILL

Infill is the most important factor influencing ball behaviour on the playing surface of an artificial turf pitch.

Infill quality is paramount for meeting the performance criteria of an artificial turf pitch – and is thus an extremely important ingredient for the image and perception of the playing surface.

So far, rubber infill is the one infill type which ensures running characteristics and ball rebound similar to that of natural turf.

As granules will inevitably compact over time, infill must regularly be topped up to ensure optimum pitch performance. Yet, proper, regular maintenance in the form of pitch raking / brushing will ensure that such refill is kept at an absolute minimum – and is thus essential.

Pitches should furthermore be constructed with proper fencing to keep infill on the pitch, and players should brush off clothes and empty shoes before leaving the pitch.

Take a closer look at our various rubber granulates

DOWNLOAD GENAN’S 3 SIMPLE GUIDES TO THE INSTALLATION AND MAINTENANCE OF
– AS WELL AS BEHAVIOUR AROUND – ARTIFICIAL TURF PITCHES:

DOWNLOAD GENAN’S FACT SHEET ON THE APPLICATION OF RUBBER GRANULATE FOR ARTIFICIAL TURF PITCHES IN DENMARK:

DOWNLOAD GENAN’S LETTER OF INFORMATION ON THE DECISION-MAKING PROCESS RELATED TO THE ECHA RESTRICTION PROPOSAL FOR INTENTIONALLY ADDED MICROPLASTICS:

A scope and project plan for lab and field test of the effectiveness of CEN TR-17519:2020 Risk management Measures (RMM) for granulate infill at sports facilities with synthetic turf

Copyright 2017 - Designed by Hive and developed by Convince